Dotmaster has been painting two murals on Davis House rooftop in Croydon which has been organised by Rise Gallery as part of the Croydon Mural Project.

The first completed mural sits pride of place overlooking Croydon High Street. It’s colourful, bright and can’t be missed as you approach the High Street from South End. The juxtaposition of grey sky and concrete frame it and make it look fresh and bright I especially like the fabric of the dolls dress the folds and creases look smooth and silky a clever illusion considering the surface it is painted on. Dotmasters has done a few toy murals notably for the Crows Nest Gallery, London.

His use of the “TOY” tag is a self appointed acronym as he is better known for using life sized stencils and openly admits to being nervous when starting a new mural, although the evidence here suggests more skill and confidence than the tag’s meaning.

Welcome “Astroboy” a new toy in Toy Town and the conclusion of Dotmasters huge murals. Part of the Toy Town series he started years ago at Nuart in Stavanger it is looking at his companion on the roof top under Davis House. The two murals took Dotmaster over week to complete. Against autumnal wind & rain bad, plus a fear of heights, he has produced two exceptional murals that cannot be ignored by passing buses and pedestrians.

These two murals represent the start of phase two of the Croydon Mural Project, kick-started by Rise Gallery and in partnership with Atollo Art, their aim to help raise the profile of Croydon and bring art into the community.

For those of you who aren’t familiar with the area here’s where to find it:

The Dotmaster is a UK “painter & decorator (this is his twitter profile description :-)” from Brighton he imbues all his best work with a sense of humour, usually poking fun at populist media. He has exhibited all over the world and was invited to take part in the Banksy Waterloo ‘Cans Festival’ in Leake Street London in 2008. He also appeared in “Exit through the gift shop” Banksy’s awarding winning documentary.

There’s  an excellent interview he gave to Widewalls – Maria Domenica Arcuri after his solo show ‘Trash ‘n’ Cash’ that’s really worth a read as it creates an impression of an artist who really enjoys what he does and he also has genuine enthusiasm & positivity for street art and having some fun whilst doing it! 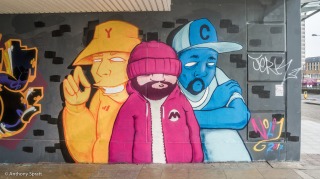