Welcome back to part 2 of this Femme Fierce special today we will have a look at the final few pieces.

First up Park street with Maggio.

This piece is called Let Love Eat Us this is a special piece to me as this was the first photo i ever took of the art in Croydon. The piece depicts what looks like a bird inhaling love hearts.

Moving along we get to Athena by Giusi Tomasello.

Depicting the Greek virgin goddess of reason, intelligent activity, arts and literature this piece has had a interesting history it was vandalised and then repaired above is the original piece and below is the repaired work

Next we move to Artista

Next up Amara Por Dios

Next one is Titled YO! Croydon

Up into Katherine street we go for Georgie art

Ok Down into High Street we go

up next is Haz@rd One

This striking gold tribal piece catches the eye Hazard really goes all out. This was a very long time stayer until august when Eska and Morgazmik painted a piece in its place the piece was vandalised but thankfully restored to its former glory

So that’s the end for the Femme Fierce art showcase. 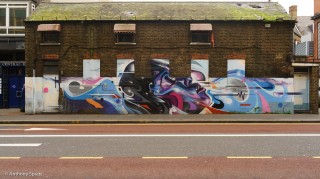